The Power of Families 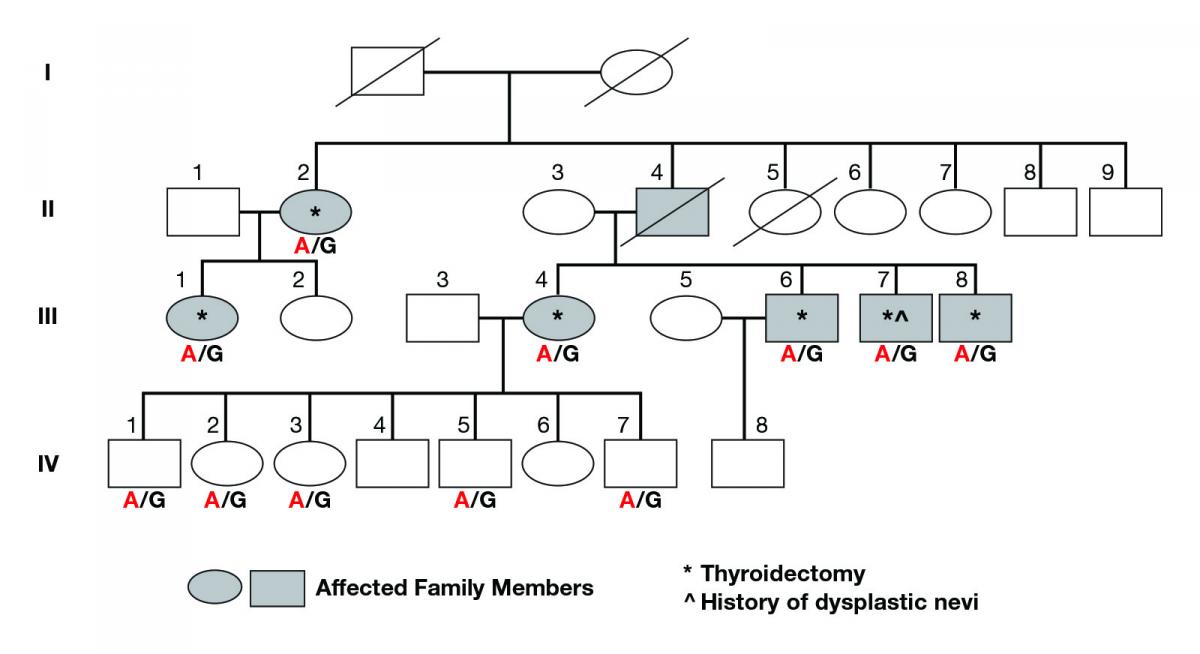 Genomic analysis of a family with thyroid cancer identifies HABP2 as a tumor suppressor gene.

Many diseases that are seemingly sporadic in the population at large cluster in certain families. Where genetic linkage can be established, researchers have an opportunity to discover specific DNA mutations that might give insight into not only the familial forms of the disease, but also the more widespread pathological mechanisms.

In 2010, Electron Kebebew, M.D., Chief of CCR’s Endocrine Oncology Branch, and his colleagues began enrolling families in a clinical protocol to identify susceptibility genes for nonmedullary thyroid cancer (NMTC), the predominant form of thyroid cancer in the U.S. A family was referred to the NIH in which two of seven children and one member of the subsequent generation had been diagnosed with the disease. Ultrasound screening then revealed thyroid neoplasms in four other members of the third generation.

The researchers sequenced DNA from the blood of all affected family members and from unaffected spouses, using whole-exome sequencing to comprehensively search for mutations in the DNA that code for proteins. They discovered and validated a single-nucleotide substitution that was present in all seven affected family members: a substitution of adenine to guanine in the HABP2 gene (G534E), which predicted a single amino acid change in the HABP2 protein. HABP2 is a serine protease found in the plasma, which cleaves fibrinogen and degrades the extracellular matrix. Molecular modeling of the amino acid change identified by the team revealed a disruption to the active site of the enzyme.

A single copy of the variant allele was present in the blood and tumor tissue of affected family members, which was consistent with the autosomal dominant pattern of the disease. Expression of the gene and protein was increased selectively in the tumor tissue. By surveying other cancer-associated mutations, rearrangements, and copy number variations, the researchers could find no evidence for additional genetic changes that might contribute to tumor formation.

Moving to cell lines, the researchers performed a series of experiments to study how altering the levels of wild-type and mutant HAPB2 affected cancerous phenotypes. Knocking down the wild-type form of the gene increased colony formation and cellular migration, while stable overexpression reduced these characteristics. Transient overexpression of the G534E variant, however, substantially increased the cancerous phenotype, even in the presence of wild-type HAPB2, suggesting that tumor suppression can indeed be disrupted by a single dominant variant.

Kebebew and his colleagues took advantage of The Cancer Genome Atlas (TCGA) to look for the presence of the G534E variant in more than 400 patients with nonmedullary thyroid cancer. They found the variant in 4.7 percent of patients, as compared with its presence in only 0.7 percent of a random sampling from a multiethnic population database. This suggests the presence of other cases of familial NMTC. The group’s findings were published in the July 30, 2015, issue of the New England Journal of Medicine.

“Next, we need to consider how to handle screening for this variant,” said Kebebew. “Should carriers of the variant undergo preventative thyroidectomy? Should carriers in the general population be screened for thyroid neoplasms? Does the variant confer a predisposition to other cancers?” These and many more questions on the role of this gene in cancer initiation and progression await further research.