A Brake for Cancer 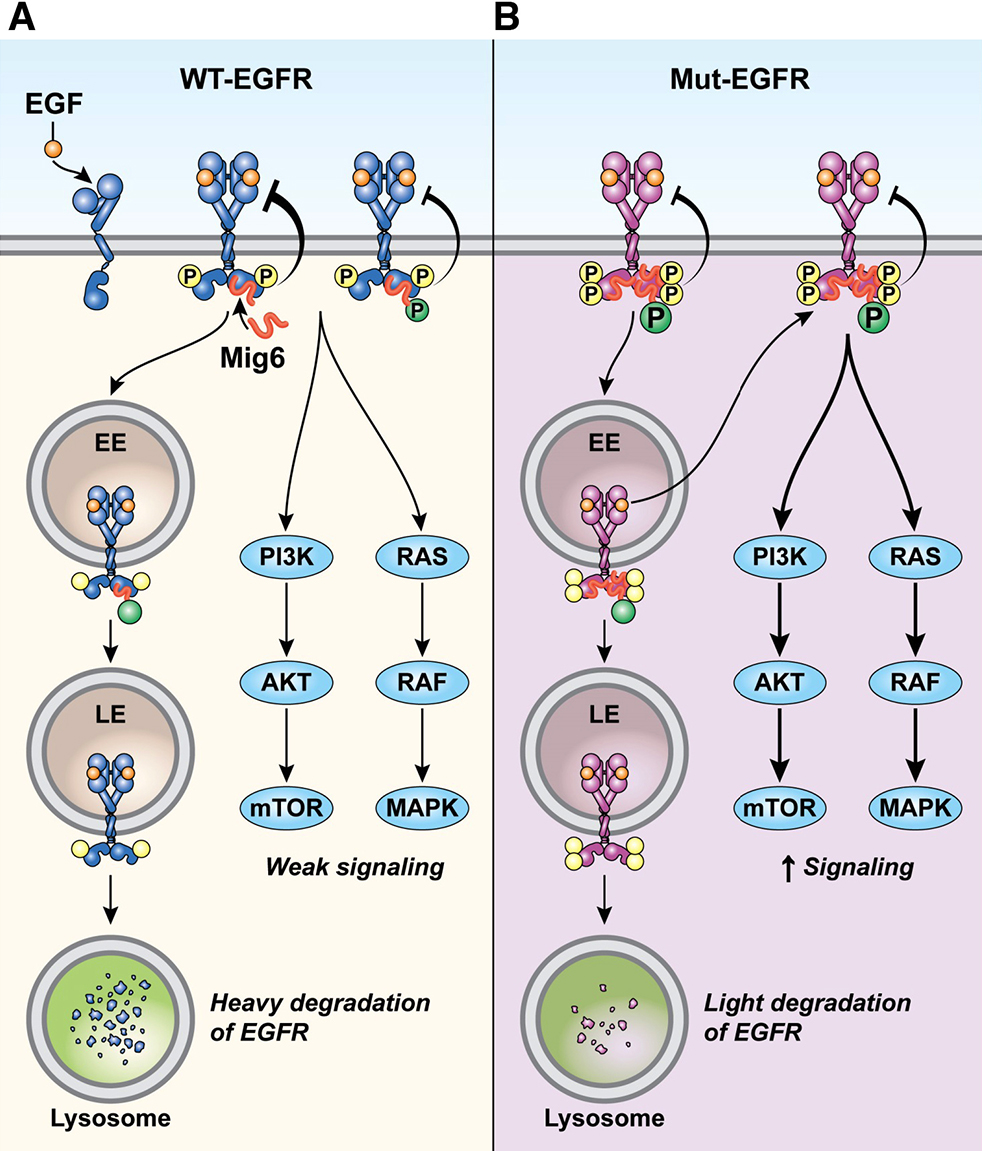 A common molecular driver of lung cancer, somatic mutations in the epidermal growth factor receptor (EGFR) can be differentially targeted with tyrosine kinase inhibitors (TKIs) such as gefitinib (Iressa) or erlotinib (Tarceva). Patients with such mutations in EGFR respond dramatically to these inhibitors, but all develop acquired drug resistance and eventually progress.

Udayan Guha, M.D., Ph.D., Investigator in CCR’s Thoracic and Gastrointestinal Oncology Branch, and his colleagues have been studying the signaling pathways downstream of both wild-type and mutant EGFR activation, with the goal of contributing to more effective therapies. By using stable heavy isotope–labeled amino acids to tag the complete proteome, the team could quantify proteins that were highly phosphorylated in human bronchial epithelial cells expressing mutant EGFRs. As recently published in Cancer Discovery, they followed up on one such protein—MIG6—to uncover its role as a tumor suppressor.

MIG6 is known to regulate wild-type EGFR and other related receptors through a negative feedback process involving both increased degradation of the receptor and dampening of its tyrosine kinase activity. By generating a series of genetically modified mice, in which mice carrying 0, 1, or 2 copies of Mig6 were also engineered to carry either of the two different inducible EGFR variants associated with lung cancer, the team found that mice lacking two copies of Mig6 had accelerated lung tumor formation.

To explore the mechanism of the interaction between MIG6 and mutant EGFR, the researchers returned to proteomics and they discovered that MIG6 is constitutively phosphorylated on one or two adjacent tyrosine residues (Y394/Y395) in both mouse and human lung adenocarcinoma cells expressing mutant EGFRs. Moreover, drug sensitivity to TKIs was correlated with this MIG6 phosphorylation, suggesting that it was important to the efficacy of mutant EGFR in promoting tumor growth.

In cell culture, the researchers found that Y394/Y395 phosphorylation strengthened the interaction between MIG6 and mutant EGFR. Unlike wild-type EGFR, whose degradation is enhanced by MIG6, mutant EGFR was stabilized by Y394/Y395 phosphorylation of MIG6. Based on these data, the researchers propose a model that contrasts the interaction of wild-type and mutant EGFR with MIG6. In wild-type EGFR, MIG6 acts as a negative feedback regulator of EGFR; once activated, the EGFR phosphorylates MIG6, which in turn inhibits the strength of downstream signaling through PI3K and RAS pathways, as well as promotes lysosomal degradation of the EGFR complex. However, the mutant EGFR hyperphosphorylates MIG6, dampening, but not completely abolishing, its ability to downregulate EGFR signaling.

“Our data provide strong preclinical evidence that MIG6 is a potent tumor suppressor in mutant EGFR-driven lung cancer,” said Guha. “However, we will need prospective biomarker-validation studies to establish the role of MIG6 expression or phosphorylation in the overall prognosis of patients with and without EGFR mutations.”