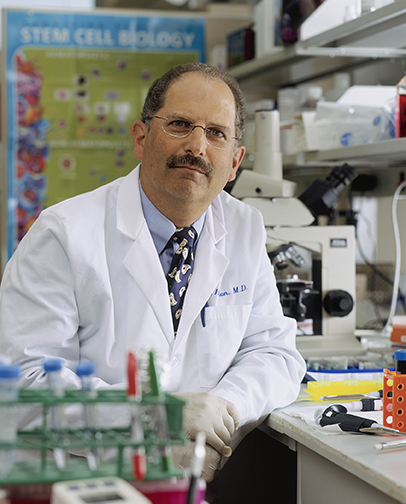 In 1981, the NCI intramural program enrolled its first patient with AIDS. Given our expertise in epidemiology, cancer, retroviruses, cell biology, immunology, and drug development, our responsibility in the face of this public health crisis seemed obvious. Indeed, NCI investigators were instrumental in such seminal milestones as discovering HIV, proving HIV as the causal agent of AIDS, developing the first blood test for HIV, describing the first antibodies to neutralize HIV, and developing the first active drug, AZT, for HIV/AIDS therapy.

Today, HIV/AIDS is no longer an automatic death sentence, but is a manageable chronic disease in much of the world. Although the immediate crisis has abated, CCR continues its commitment to HIV/AIDS research. The insights we gain from studying this virus and its impact on human cell physiology not only benefit those directly affected by HIV/AIDS, but also often strengthen our understanding of cancer.

As we learn in “Vaccines 2.0,” Jay A. Berzofsky, M.D., Ph.D., Chief of CCR’s Vaccine Branch, brings together research in both HIV and cancer within the branch as a whole and within his own laboratory. Berzofsky and his colleagues described the first T-cell epitopes of HIV; while his laboratory continues to focus on the immune response to HIV, it has also made fundamental advances in cancer immunotherapies. As Berzofsky points out, both HIV and cancer cause chronic disease that escapes the immune system through mutation. Both could benefit from therapeutic vaccines, which he and his team have been developing from cellular and animal models through to clinical trials.

Stephen Hughes, Ph.D., Chief of CCR’s Retroviral Replication Laboratory, is internationally recognized for his work on essential enzymes in the HIV life cycle. He and his colleagues described some of the first structures of HIV-1 protease and reverse transcriptase. His work on retroviruses, however, began when he was a Postdoctoral Fellow with Harold Varmus, M.D., and Michael Bishop, M.D., who subsequently won the Nobel Prize in Medicine for their discovery of the cellular origin of retroviral oncogenes. And, as we learn in “Viral Activity,” Hughes’ work today has brought him back to the role that viral integration plays in abnormal cellular proliferation.

Featured in “Through the High-Tech Looking Glass,” Sriram Subramaniam, Ph.D., Senior Investigator in CCR’s Laboratory of Cell Biology, has developed techniques in high-resolution electron microscopy that bridge the domains of structural and cell biology. His work gives him unique access to the architectures of both human immunodeficiency viruses and cancer cells.

Young investigators are also drawn to the interface of virology and cancer biology. Joanna Sztuba-Solinska, Ph.D., who is currently a Research Fellow with Stuart Le Grice, Ph.D., Senior Investigator in CCR’s Basic Research Laboratory, came to CCR in order to study the evolution of RNA viruses. Her work on the functional implications of complex RNA structures currently includes the cancer-causing Kaposi sarcoma herpesvirus, in addition to Ebola virus, Dengue virus, and other global health concerns.

CCR’s commitment to basic and clinical research that will lead to novel therapeutic interventions for both cancer and HIV is, thus, much more than a two-pronged response to distinct public health crises. It uniquely brings together two research agendas, which explore common biological mechanisms and insights, to synergistically advance our knowledge of, and ability to, respond to emerging issues related to cancer and HIV/AIDS.